Stephen Dawson, Co Founder of Impetus Trust, a venture philanthropy organisation has had a long and illustrious career in venture capital. He grew up in the Midlands then went to Exeter to study economics. He showed early signs of a philanthropic leaning when he opted to spend time as a volunteer in Madagascar after university. On his return, he started his career in the IT sector as a consultant for Logica before moving into telecoms development with Reuters and in early 1973 he helped develop an FX trading service. This soon became a working standard.

Following this success, he was put forward as one of an elite team who could help with a labour government initiative for something called the National Enterprise Board. “The organisation was set up to help small companies get funding and plug known equity gaps. We were an early prototype for venture capitalism as it exists today.” We became the first institutional investor in the UK software industry.” Explains Stephen, who is a quiet and unassuming character.

Unfortunately a Conservative party win at the next election saw the project cancelled but the City investors picked up the baton where the National Enterprise Board dropped it and continued to work with the companies they’d invested in. “Those initial investors really galvanised the venture capital industry concept.” Stephen says. Later, in the mid 1980’s he joined a private equity operation himself, called ECI which is now one of the longest established private equity groups in theUK.
1990 prove to be a turning point for him and ECI when the founder, Tony Lorenz died at forty six from a blood clot in his lung. “There were three of us at the next level who had to pick up the pieces.” Says Stephen. “It wasn’t easy but in some ways the unexpected change allowed us freedom to re engineer the operation and improve it.”

ECI continued to grow and their greatest investment came in 1994 with Guardian IT which made twenty three times its original investment. “We bought it from ICL and expanded their services which were predominantly disaster recovery across Europe. Timing was good for its sale in the late 1990’s when the stock market was high, so we sold out before the bubble burst and at an extraordinary price.”

Despite this reign of success, an early retirement was on the cards for Stephen, mainly because partners at ECI have an agreed plan to do so. “We want to make room for new blood and so plan for seniors to retire at around fifty five. Our reasoning is that the entrepreneurs we work with are getting younger and we as a business need to be able to relate to them. We have thirty people in total so it’s a small partnership style operation and we also want to keep the best brains so they need to see a clear way to the top.”

Knowing this planned retirement was approaching, Stephen had been thinking about what he would do next. He toyed with the idea of giving significant amounts of money away himself until he alighted on an idea of launching a charity for the venture capital industry. He had seen something similar in the hedge funds industry called Ark.

Stephen, who still works as a Non Exec Chairman at ECI, said he wanted to continue working with mid size companies. So he formed an idea to transfer his experience to mid size charities in need of venture capital style management and investment. After reviewing many charities and really looking for the right opportunity, Stephen alighted on an area that he could help with. “Donors don’t like investing in infrastructure. They want all their money to go to end recipients which caused a gap in funding where essentially charities couldn’t invest in basic things such as IT or marketing to improve.”

He elaborates on his initial concept. “I really wanted to prove that venture philanthropy could work in the UK – it already had a track record in the USA.” Impetus followed a charity model and set their mind to creating an organisation that focused on ‘transformational impact’. I briefly interject to mention the problem of hard nosed business people wandering into the third sector to find their approach just too confrontational for charity workers. Stephen says he went to great pains to counteract this clash and recognised that it would be a potential problem from the start. “We appointed not-for- profit trustees, to help us make the cultural transition.” He says. “I think lack of humility was part of the problem in the past. The dot com boom generated a lot of arrogance which really met with disdain from the philanthropy sector when the tech world imploded. “It demonstrated that if the corporate world couldn’t run their own business, how could they advise and run a charity? Putting together people from business and charity, undoubtedly has been tricky but we have worked on it and we recognise there are different issues to managing non paid and paid staff.”

Other problems have been that many charities now see Impetus just as a source of funding. “It takes a while to realise we offer a joint venture approach with investment being just part of it.” The highs have been the success achieved with the few organisations Impetus has worked with. “We agree objectives, impact metrics and work with charitable organisations for four years then at this time the charity graduates from Impetus to go out into the world on their own. Often improvements can come from simple analysis of the charity. Sometimes they have underpriced ideas or haven’t allocated costs correctly.”

He cites an example. “We worked with the Eating Disorder Association which was facing immense competition for donations and funds were dropping off. We rebranded it “beat” (beat eating disorders) and looked at its earned income activities. They had a publishing operation which was a potential goldmine. We recommended they got a senior person to review this and look at opportunities in particular to launch events. There are also usually simple ways of making fund raising more commercial like auctioning marathon places which generate more money back into charity coffers.”

The fund has ¬£11million in its pot and selects three to four charities a year to review and invest in. (They have a portfolio of thirteen charities). Impetus is also reviewing its own activities in a similar way and looking at its success and improvements of its own operation.

Their St Giles Trust investment was a turning point. “It has been one of the biggest successes we have had. The St Giles Trust work in prisons and offer an NVQ3 in counselling to prisoners who then leave prison with a new skill but the knock on effect is that they are able to counsel inside the prison and improve life for inhabitants. When we reviewed the St Giles Trust business they were working in many areas including homelessness and rough sleeping but these core issues were no longer raising interest with the public and the spread of help they offered was draining resources. We could see that their one area of NVQ3 prison counselling education was creating enormous change for both prisoners and society. It was obvious it could do better with more resources focused on it.”

They reviewed the benefits for refocusing the charity. “The savings for society as a whole were immense. It costs ¬£200,000 for someone to go through the criminal justice system and spend a year in jail. Their work helps stall re offending which is currently as high as seventy percent‚Äîsaving society this cost burden in many cases. The qualification changes lives for prisoners inside and helps them develop a life outside. Once St Giles Trust saw the impact that re focusing their energies and finances in this direction would have, they altered their strategy completely.”

And in turn so did Impetus. We decided to narrow our focus on organisations that reduce poverty and economic disadvantage with a view to growing our expertise and helping learning across our charities. Impetus investment capacity is around ¬£2million a year but in practice around ¬£500,000 will go to one organisation.
Stephen Dawson, co founder says for him the key pointers are
Impact and figures. It’s about results. Impetus portfolio charities have increased the number of people they help by 53% a year and have grown their revenue by 29% a year (on average) Impetus charities help more than 186,000 people a year.Leverage. For every ¬£1 they bring in ¬£5 in value in pro bono work and co- investment.

Real examples. St Giles Trust reduces re offending. “We did a rigorous analysis and could see where the magic in their work was. We made it easier to stick to their mission, stop drift and helped them to change focus.”

Finishing Stephen says. “There are only a small amount of organisations we can help and we don’t want to reinvent the wheel but we could do more if others join us with more funding.” Impetus are also compiling a report to see if they can disseminate their transformational ideology but Stephen says “it’s still in development.” For any hung individuals wanting to set up a foundation, Impetus can help. “We can apply our model to a foundation set up for a customised fee.”

Stephen’s move into venture philanthropy has proven a formidable task, probably more so than helping to create a whole venture capital industry. “It is riddled with ongoing challenges but we really are transforming lives for real people and if I had to sum up everything we want to achieve in one word, transformation would be it.” 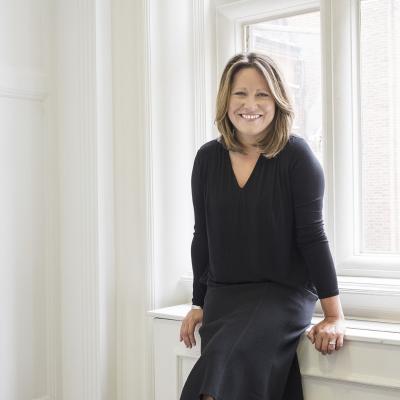 60 second interview with Jessica May, Peters May

In our 60 second interview series, Citywealth speaks to Jessica May, one of the two founding partners of Peters May, about launching a family law practice and wearing many different 'hats'. END_OF_DOCUMENT_TOKEN_TO_BE_REPLACED

Companies should look at their network infrastructure now ahead of Olympic Games next year and ask 'can we really support homeworking?'