Durrell Wildlife Conservation Trust: Help them save the worlds animals from extinction

Durrell Wildlife Conservation Trust, who celebrated their fiftieth anniversary last year, is a well know destination in Jersey for visits from tourists, but it may be less well known as a serious authority in worldwide conservation. They still undertake global work that saves species and habitats from decline and extinction, work that Gerald Durrell, their founder who wrote thirty seven books, started decades ago. A visit to the centre is a good way to spend a day but the international connections aren’t always obvious to the day tripper. A look behind the scenes even to their boardroom reveals surprises; they have one of the most unusual tables the eye may have seen. Made at Parnham House, which was home to John Makepeace OBE, who was an acclaimed furniture maker with pupils including David Linley, you will find a table that represents Noah’s Ark and it seems almost as big as the full size ark might have been. As well as this, behind closed doors, you will find breeding programmes of geckos and frogs to repopulate devastated areas of the world and restart food chains.

Lee Durrell, Gerald Durrell’s second wife is instrumental in the governance of the Durrell Wildlife Conservation Trust, a Southern Belle, from Memphis Tennessee, she went to Bryn Mawr College and then gained her PhD in zoology from Duke University. She says her interest in animals could have been mapped from childhood when she was given a doll but was more interested in a dead squirrel.

In the mid 1970’s, after returning from Madagascar where she did her PhD research, she was invited to a cocktail party to honour Gerald Durrell and the rest as they say is history, they married in 1979.

“Gerry was born in India and grew up in Corfu,” Lee says, “his father was an engineer at Tata steel in India, but died when Gerry was only two. The family then came back to England, but moved to Corfu when he was eight. He was schooled by tutors who used nature as the classroom and Gerry spent most of his time outdoors, studying and collecting animals from earwigs to owls. He wrote about his Corfu experiences in the well-loved classic, “My Family and Other Animals”.

During the war Gerald Durrell worked at Whipsnade Zoo and when he inherited money at age twenty one, it allowed him to finance his first animal collecting expedition.

“Gerald collected animals for zoos, but became increasingly dismayed at the zoos of the day for their ignorance in looking after animals and their attitude that there were always more animals to be had from the wild,” says Lee. “He looked in England for a place to set up his own zoo in the 1950’s. His publisher regularly visited Jersey and suggested he have a look there . The original building the Trust is in now was owned by the publisher’s friend who leased it to him when he wanted to go back to the UK. We think of it as “Durrell’s luck” says Lee.

“In March 1959 the deal went through, much to the relief of Gerry’s sister, who had been keeping his animals on her garden in Bournemouth. Four years later he set up a charitable trust to oversee the zoo and asked all his fans to donate money to help. Fortunately it was the heyday of Jersey tourism in the 1960 and 70’s so gate receipts provided a good income. Zoo visitors were delighted to see animals from Gerry’s now best-selling books, such as a tapirs from Argentina, called Claudius and Claudina, and Chumley the chimpanzee. In those days Gerry would go to fundraisers in the UK with a baby gorilla sitting next to him on BOC flights.”

Gerald visited Mauritius in 1976 which is where the Dodo came from. It was poignant for Durrell because it was where the Dodo was rapidly made extinct in 1680 because of the impact of humans on the island. The Dodo was an enormous fat turkey like bird related to a pigeon which was made popular by a character in Lewis Carroll’s, Alice in Wonderland book where it organised a caucus race – running in a circle to get dry. Also in Mauritius, Durrell began the restoration of an offshore islet, Round Island, where the native flora and fauna had been decimated by goats and rabbits put on to the island by sailors for hunting when next they came to the region. Beginning in the mid 1980s Durrell began a project to clear the island of goats, rabbits and weeds in a multi-faceted conservation project. “Species are may be used as ‘flagships’ for saving whole areas of land,” confirms Lee, “It was an immense task.”

The island’s recovery is well underway and there is now a ninety nine year lease that allows Durrell to continue with the ongoing work, rebuilding the ecosystem step by step. In 2010 this includes releasing one hundred and fifty giant Aldabra tortoises tohelp with seed dispersal and weed control. Durrell also put lesser night geckos on Round Island to start the food chain again – it’s an eco system restoration. Durrell had six people constantly there and eventually the goal is to have it made into a world heritage site. These are largely volcanic islands, with mostly unique species, which contribute to the planet’s biodiversity.

As a charity, Durrell receives donations from varied sources, including support from the Darwin Initiative run by Defra (The Department for Environment, Food and Rural Affairs), and has helped save many species from extinction. Current recovery projects include the mountain chicken which is actually an enormous frog, and the Madagascan Pochard, a rare duck that was thought to be extinct. “We save species that are critically endangered and in the most threatened habitats including Madagascar, Mauritius, the Eastern Caribbean and the Galapagos ,” says Durrell CEO, Paul Masterton. ‘We undertake extreme challenges and the Pochard is a great example – rediscovered by The Peregrine Fund (a conservation partner) at a remote lake in Madagascar, the species was down to less than twenty breeding pairs. With Durrell’s help, this number has doubled and we hope that this bird will recover.’ He says that they have to pick their battles though because of limited resources and generally focus on islands because of the high levels of endemics (species only found there) in these ecosystems Masterton says of their animal collection at the wildlife park in Jersey, “We keep animals for three main reasons: Firstly as a safety net, if they are highly endangered and likely to go extinct in the wild. Like the Mountain chicken, which is a huge frog about 1kg in size, found only in Montserrat in the Caribbean, It’s being attacked by Chytrid, a fungal disease affecting a third of all amphibians worldwide, of which there are 6000 species. It is likely, but not certain, that Chytrid originated in Africa and that its rapid global spread has been enabled by the trade in frogs for pharmaceutical testing.

Durrell is at the forefront of practical conservation efforts to combat Chytrid. We were the first organisation to be called when Montserrat discovered thousands of Mountain Chickens dying and we responded by securing healthy animals to begin a breeding programme for a future reintroduction of the frog to the island. Our teams in Montserrat hiked around to find the frogs and do a kind of sheep dip on the remaining animals to see if this would build resistance to Chytrid (anti bacterial treatment similar to athlete’s foot). Unfortunately, the disease is water borne system and long lived, making a successful cure challenging. Like many of our projects, the Mountain Chicken programme will take a long term commitment and is costly, with over ¬£200,000 already spent. Local governments were only able to help us with transport and field support, but we believe this is a critical project for us. Not only should every species be given the chance to survive, the potential loss of so many amphibian species could have catastrophic worldwide implications. Experience tell us that disease doesn’t stay isolated and it’s a matter of time before it moves elsewhere, including, sooner or later hitting Jersey'”
Secondly we keep animals at Durrell to develop our knowledge of animal husbandry – understanding what it takes for animals to survive and thrive, and then sharing this information with zoos and wildlife organisations around the world. We try and understand everything we can about animals. Then finally we keep them for “box office” reasons, to attract visitors. Being a visitor attraction provides essential income for our conservation work to continue and showcasing our work through the animal collection provides a unique, enjoyable and educational experience to our guests.

As a charity Durrell is facing challenging economic times and balances its work against the donations and income it generates. Many donations are restricted to specific projects, like the Darwin award for the mountain chicken but we also receive unrestricted support which can go towards the overall costs of running the Trust. In any event Masterton is paying close attention to financial discipline and ensuring that overheads are kept to a minimum and conservation spend maximised.

“Durrell still has the philosophy and vision that the organisation was born with in the beginning – we take on the toughest conservation challenges and commit ourselves to long term programmes to save species from extinction. We have come to realise though that we should never consider a species truly ‘saved’ and that long term care and attention is required- which is why we have a growing focus on building conservation capacity though our International Training Centre. We know that what we do works,” says Masterton. “If we could recover the Mauritian kestrel, – once down to four birds they now number several hundred- then anything is possible.”

Why Durrell need your support

Without funding from legacies, trusts and benefactors, who gift around sixty percent of their income, they couldn’t do what they do. Gate receipts in the sixties and seventies paid for developing Durrell’s overseas conservation programmes but with the drop in tourism to Jersey it’s become more important to find donors. Corporate support has also dropped off with the credit crunch. Their fund raising department develops proposals and they have thirty to fifty applications ongoing which Masterton says is demanding and labour intensive and requires many reports to be compiled. Donations vary with individual supporters giving between ¬£1000 to ¬£100,000. Legacies tend to be larger but also vary and some are substantial. The rest of their money comes from commercial admission, sponsorships and events. “We are developing a range of activities and events for all tastes and ages,” says Masterton, “including the ‘Durrell Dash’ a 13k romp around the lanes of Trinity. We charge ¬£10 per person to enter and it’s gone up from 220 people to 400 in two years. We also have a popular golf day. Animal sponsorship is increasingly important with companies taking on a specific species. With the support of Fairbairn Private Bank we restarted our Ring Tailed Lemur breeding programme and had our first baby in thirteen years. “

Even with the increased focus, on our finances and fund raising, we face an operating deficit and are looking for additional ways to raise funds to support the running of the conservation trust and the global work that we are committed to.”

Please contact Paul Masterton at the Durrell Wildlife Conservation Trust if you would like any further information:

Is your client a toxic wife?

Join the debate by googling Tara, Telegraphy and toxic wives.

END_OF_DOCUMENT_TOKEN_TO_BE_REPLACED 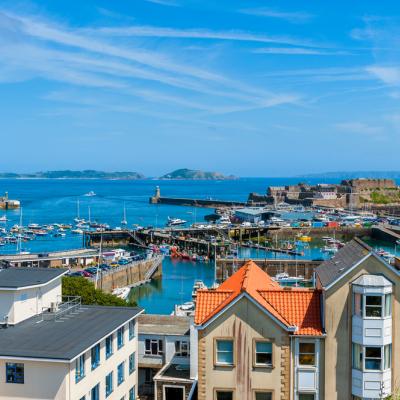 The launch last year of the Guernsey Green Fund, the world's first regulated green investment fund product, has put Guernsey on the map as a hub for investors focused not only on financial returns but also on environmental sustainability. END_OF_DOCUMENT_TOKEN_TO_BE_REPLACED