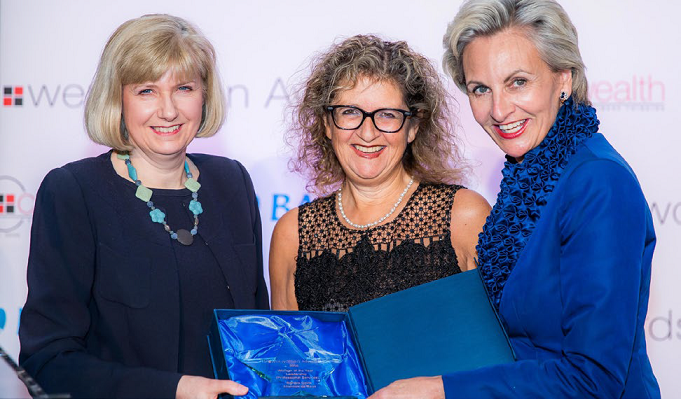 Photo from left: Wendy Papworth of Barclays who sponsored the event, Sandra Davis of Mishcon de Reya who won Woman of the Year: Leadership, Professional Services and Frances Edmonds, host.

The Citywealth Powerwomen Awards, now in their third year, took place on 3 February 2016.  The awards commend individuals and companies who maximise the potential of women in wealth,  supporting and promoting diversity.

The event which was hosted by the best-selling author and broadcaster Frances Edmonds, who has been rated Britain’s most entertaining female speaker in a recent survey by The Times also featured  pre recorded footage of the shortlisted candidates to set the scene for the guests. The ceremony also welcomed Heather McGregor, managing director and principal shareholder of communications executive search firm Taylor Bennett.

The organisation work to promote diversity in the communications industry through their Taylor Bennett Foundation. An experienced writer and columnist in the national media, she is best known for her Financial Times ‘Mrs Moneypenny’ columns. She was also a founding member of the steering committee of the 30% Club, working to raise the representation of women at senior levels within UK’s publicly quoted companies. The Taylor Bennett Foundation, which benefited financially from the evening, is an award winning work-based PR training programme that was created to prepare black, Asian and minority ethnic (BAME) graduates for career in communications. In the last eight years, more than 140 graduates have been through the programmes, over eighty percent of whom have gone on to work in this field.

The evening also included a new format interjecting live interviews from guest reporter David Garrido, a radio and TV broadcaster best known for covering high-profile sporting events on Sky Sports. Garrido interviewed pre-selected guests who included Nancy Curtin of Close Brothers and Stella Mitchel-Voisin from Summit Trust International with questions about diversity and thoughts on the awards and evening. The interviews were streamed live onto the stage.

In the run-up to the awards, Citywealth conducted research with two hundred women across multiple financial centres, which revealed some very interesting statistics. In spite of recent government targets set at thirty three percent female board members for FTSE 100 firms by 2020, the Citywealth survey showed that the majority of women in the wealth industry didn’t believe in mandatory quotas for women. Forty-eight percent were against, who were mostly from the European IFCs, arguing they would much rather be promoted on merit. Only thirty-one percent supported mandatory quotas with popular sentiment concluding that “it was a necessary evil to kickstart change.” The majority of these women were from the Caribbean and Central America. When it came to mentors and role models, almost fifty percent of our IFC Powerwomen drew inspiration from professional relationships, while forty-two percent of them turned to their family and friends with parents being cited as strong role models. The interesting back story for such a large response of parents, friends or family as mentors, when analysed, was that this group mainly came from relatives with strong corporate backgrounds. This paved the way for better business and mentoring support, potentially effective coaching time that is absent for women who are not reaching the same career progression.

In 2015, Powerwomen™ was trademarked by Citywealth to underline the commitment to supporting women in the financial industry with a recognisable brand.

To see the full winners and photos please sign up for a subscription on our website where new readers can receive a complimentary edition. If you are an award winner, then just email for a complimentary copy mkunova@citywealthmag.com