Discussions and conferences included ‘Why and How to Give More’, ‘Youth, Activism & Government: Unleashing Social Energy’ and ‘Creating a Philanthropic Legacy’. Hadeel Ibrahim is the under-30 daughter of Mo Ibrahim and the director of external relations for the Mo Ibrahim Foundation: ‘One of the biggest challenges of international development is institutional arrogance’. There are too many northern donors who want to help out in Africa, but who don’t have the patience, interest, or humility necessary for listening to or working with local wisdom.

Hanah Caan is the daughter of entrepreneur James Caan and a trustee of the James Caan foundation: ‘I realised how much we could improve the market place.’ By jumping into the field of impact investing at a young age and with minimal experience, Hanah was able to see things with new eyes and to ask questions that others had forgotten.

Speakers also included Sir Ronald Cohen, from Big Society Capital, known as ‘the father of British venture capital’ and ‘the father of social investment’ and Trevor Spears, from Give More Pledge, a British Philanthropist. Trevor was appointed Companion of the Order of St Michael and St George in the 2011 New Year Honours for services to the community and UK/Israel relations.

Federica Fanari hosted the London Edition of the Summit producing and gathering the participants for the Nexus London. She has a broad experience in green marketing and environmental responsibility. She also has developed various philanthropy-support ventures NOGs. Jonah Wittkamper and Rachel Cohen Gerrol led the process to convene the July 2011 Nexus: Global Youth Summit on Innovative Philanthropy and Social Entrepreneurship. Jonah currently is the Director of Search for Common Ground-USA, where he manages the US domestic portfolio of the world’s largest bridge-building/conflict resolution organisation.

The Nexus Global Youth Summit engages young entrepreneurs and inheritors in conversations around innovative ways to use wealth and privilege to improve the world. The London event supported the China Global Summit that will take place in 21 and 22 July 2012.

Nexus is an international network of 450+ young philanthropists, social entrepreneurs and influencers whose families have a combined net worth of over $100 billion USD. Nexus is a network of networks, and finds its power in convening diverse groups from Muslim, Jewish, and Christian philanthropic communities as well as others. The group promotes the celebration of diversity as a framework for collaboration and philanthropic decision-making. The inaugural Nexus Global Youth Summit was convened in partnership with the United Nations in July 2011.

The goals of the Nexus are to advance the potential of next generation leadership across nations and sectors, to catalyse philanthropy and social investment, and to bridge communities of wealth and social entrepreneurship through dialogue, collaborative problem solving and education.

Ions has been Chief Executive of Tactica Fund Management since it was established in 2005. Tactica distributes onshore and offshore multi-asset class funds that are managed by Goldman Sachs International.Previously, Ions was Joint Managing Director of SG Asset Management and Chief Executive of So

END_OF_DOCUMENT_TOKEN_TO_BE_REPLACED 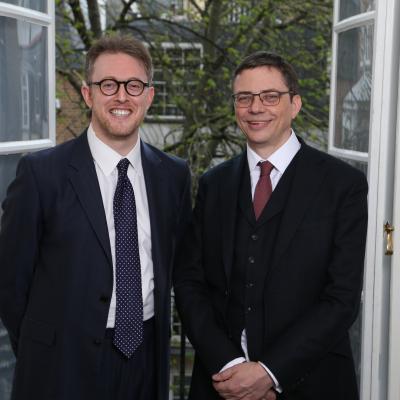 Forsters has expanded its Family team with the lateral hire of partner Simon Blain from Penningtons Manches LLP and Matthew Brunsdon Tully from 1 Hare Court. END_OF_DOCUMENT_TOKEN_TO_BE_REPLACED