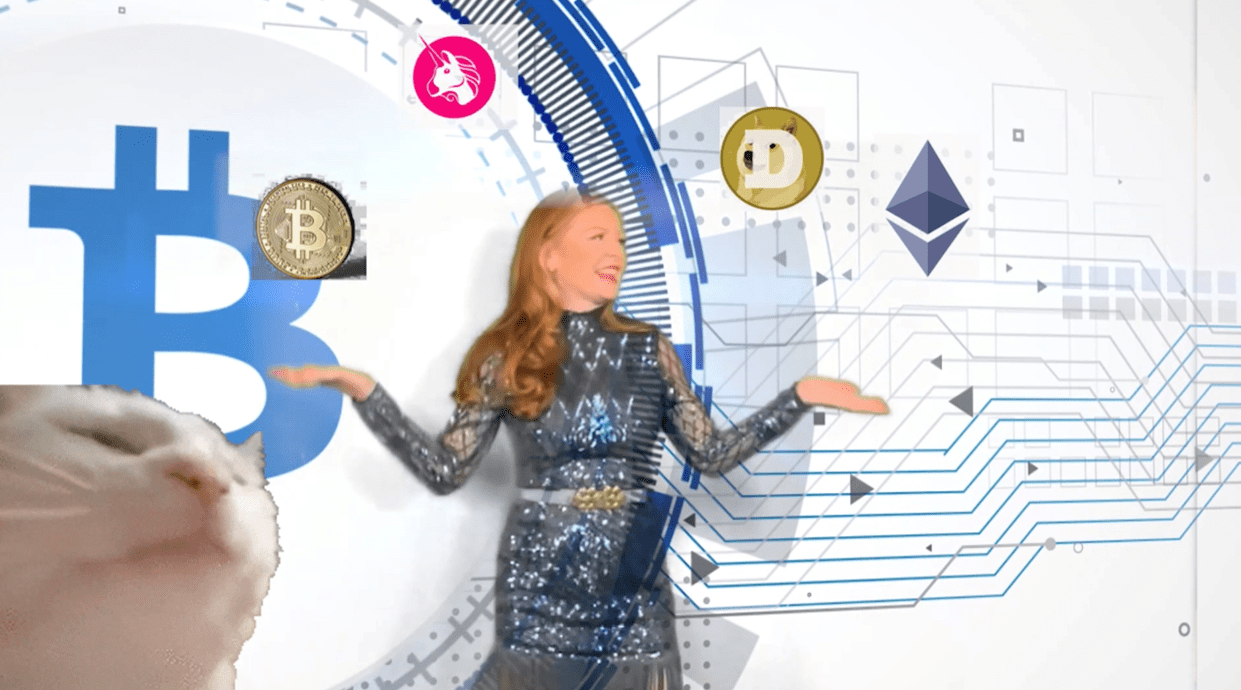 Whether investment managers or the public agree, the news surrounding bitcoin during the 2020 pandemic has pushed bitcoin prices ‘to the moon’ and raised the bar on a new wave of crypto #FOMO (fear of missing out). However, bitcoin is the poster boy, aided and abetted by Mr Musk, the tech messiah, who many are convinced tweets most of his hilarious memes about crypto after a glass of wine. Bitcoin though, is the equivalent of a polar bear on top of an iceberg without being able to see the underwater developments which are substantial and multi layered. Even in the crypto world there is a division which almost agrees with the ‘real’ world. There are ‘bitcoin maximalists’ or ‘maxi’s’; Degen’s; miners; celebrity founders; exchanges; financiers, tech entrepreneurs; blockchain brainiacs and huge communities of switched-on, tech savvy crypto traders who support pioneers into unicorns in their new ventures which go from embryo to toddler with seeding and staking. It is a world that exists, like The Matrix, almost invisible, whilst the rest of the world watches Netflix.

Crypto and blockchain can be found in Malta, Switzerland, Singapore, LA, New York and London but truly can be found anywhere. At its essence it is a tech start up industry but with an FX style trading and loyalty rewards program intertwined into it.  Despite this lack of understanding from the majority of wealth managers and the public, this is just an educational process like with all finance. Crypto has an enormous, industry that employs hundreds of thousands of people, has some of the biggest tech names in it and is born of trading, FX, coding, geeks and with gaming fun at its core. It aligns with ‘Wall Street Bets’ who became known to us all after the high-profile short trade against Melvin Capital, galvanising Robinhood retail investors from his Reddit account.  Although Robinhood is real world and not crypto. However the ‘us against them’ energy is similar: big guys v little guys.

Even if you debate bitcoin’s use as an alternative asset or as a hedge on a portfolio as all the traditional wealth managers do – they are right in portfolio terms – and also dismiss the industry because the physical AUM universe is small compared to traditional, global wealth management, crypto and blockchain have still stormed a march behind the scenes. Private crypto wealth is now substantial and media attention high. This has come strangely from fee’s (gas) which are now making substantial income for ‘wallet’ apps, exchanges and miners, just like the criticised banking world. There are also other ironies in that traditional banking staff are gravitating into crypto for instance Goldman Sachs former bankers working at Coinbase. The backdrop of Elon tweeting bitcoin and Doge images and use of wallets like Coinbase and Trust becoming as easy to use as Facebook and Instagram have all helped. Compound this with pandemic stimulus checks and global shut down and we have the ‘rise of the apes’.  All we need next is institutional money of which there is a glimmer in the fire, not yet a flame, with traditional British wealth manager Ruffer in the UK and bitcoin evangelist and cloud services company founder Michael Saylor, of MicroStrategy in the USA going public with purchases of bitcoin. Not to mention Elon’s latest missive, not only actually going to the moon with SpaceX but now with a $1.5bn purchase of bitcoin. Bitcoin is now a celebrity.

The real-world accusations of crypto and blockchain being a drug and fraud world and somehow unclean, because of past exchanges like Mt Gox where drugs were sold for bitcoin, are now (hopefully) resigned to history. Scams and rug-pulls are still prevalent and although we can never forget wild card, John McAfee with his ‘Dickening Countdown’ and high jinks, the rise of invasive tech through the phone and laptop have opened up an online fraud opportunity not just in crypto but in financial services and life. Whether you like it or not though, Mt Gox is now the stuff of legend, like the first Wall Street movie, about fast money, greed is good and a funny or sleazy view of the markets. However, putting any prejudice aside and white noise, there is a new threat emerging: govts v token providers. 2021 may be the year crypto takes hold but it may also be the year of the mega SEC law suits with accusations of security fraud – selling investments without proper paperwork. This story is still unfolding as the SEC gets familiar with the crypto and blockchain world. However, there are deep pockets in crypto, so the lasso rope may be too late: the horse has already bolted. Time will tell if crypto founders do feel the squeeze of the SEC hand around their necks.

Debating this world at the CFC St Moritz virtual conference this year was a sterling line up of thought leaders, regulatory heads and leading commentators in the sector. The line up included Anthony Pompliano, Co-founder & Partner, Morgan Creek Digital Assets who is a renowned early-stage investor in tech, Hester Peirce, Commissioner, U.S. SEC and queen bee, Meltem Demirors, CSO, Coinshares who pivoted the conversation onto the scarcity of semi conductors. Saying that the whole industry will be held back by basic, physical requirements for devices in the next few years. Dr. Thomas Moser, Alternate Member of the Governing Board, Swiss National Bank spoke as well as Michael Sonnenshein, CEO at Grayscale and previously at JP Morgan Securities and Barclays who is a crypto fund manager aiming at institutional money with his fund although this is hedge funds rather than wealth management so far. Should the wealth management industry flip into bitcoin though like Ruffer in the UK, he is well placed to help institutional ‘noobies’ find their flight. Although Ruffer used One River Asset Management custodied with Coinbase. Bitcoin custody is also attracting banking brands week on week to push into the market left of centre like Zodia custody by Standard Chartered Bank and Northern Trust to hold bitcoin and Ethereum (ETH). Cecilia Skingsley, First Deputy Governor, Riksbank, Sweden also spoke and Brett Tejpaul, Head of Institutional Sales and Trading at Coinbase. Coinbase say there are ‘off-market’ institutional deals happening but this is hard to quantify and as they reach for an IPO or direct listing like Spotify, their PR is going to be guarded understandably. However, Ruffer have publicly acknowledged custody with them and also been in the press on February 3, 2021 saying their Ruffer Multi-Strategies Fund has made $750mn profit in two months with CoinDesk breaking the news quoting Ruffer “we didn’t expect immediate fireworks”. This suggests that even small clients can become big fee earners immediately if looking at Coinbase earnings.

Bill Tai, Founder & Chairperson at Actai Global spoke, he is a VC in Palo Alto, with many successes under his belt including investing in a subscription graphic design app Canva, (which Citywealth loves using for its LinkedIn posting). Tai says that although start up’s require a big push, the ability to scale at low cost is now a unique position in history. “Someone with their laptop in their bedroom, can scale anything with software now. Canva was a college student who wanted to do posts for Instagram and scrap books.”

Frederik Gregaard, CEO, Cardano Foundation also spoke and as Cardana and Ada (their native token) are ‘up there’ with the greats it was good to get the whites of the eyes download from him. Having read their white paper I remained unconvinced because its concept seems similar to others already in existence ( Elizabeth Rossiello, BitPesa). The crypto community is built on word of mouth, trusted communities who do their homework and memes which although fun have a primal and immediate strike and viral nature that can be trouble in the sector and cause ‘dumps’ in tokens and loss of value. Appearances at conferences like CFC St Moritz are bread and butter, essential to gain credibility and retain confidence. Gregaard did just that and gets my vote and some converted fiat (or maybe converted crypto), however the crypto community is divided on their sustainability, so DYOR (do your own research). The app crypto.com is a good place to start.

The rest of the line up included:

First bitcoin purchase: Coinbase June 2017. I am a goldfish not a whale.

University of California, BerkeleyX mooc: Fundamentals of Bitcoin and cryptocurrencies

May I recommend a great crypto friend of mine?

Ash Costello is a data protection and privacy specialist, focusing on the privacy requirements of blockchain and crypto currency technologies. She advises developers and engineers to ensure their products and platforms are compliant with (among others) Europe’s General Data Protection Regulation and the California Consumer Privacy Act. She is soon to launch privacy risk management tools which assess an entity’s international privacy compliance including the GDPR and CCPA and offer remedial solutions. She is a volunteer with the UK’s The Cyber Helpline, and is in the process of establishing a related charity in Ireland.
Ash has worked with law-firms across London, Guernsey and Dublin, and is licensed to practise law in Ireland, England and Wales, and New York.